A day in Oxford

In March, we travelled with a group of students to the town of Oxford for the day.

Oxford is located in central southern England. It it the country town of Oxfordshire and is one of England’s fastest growing cities. Most people know Oxford because it is home to one of the most famous (and oldest english speaking!) school in the world – University of Oxford. And that is where are day began….

The University is made up a variety of institutions, including 38 constituent colleges and a full range of academic departments which are organised into four Divisions. All the colleges are self-governing institutions as part of the University, each controlling its own membership and with its own internal structure and activities. Being a city university, it does not have a main campus; instead, all the buildings and facilities are scattered throughout the metropolitan centre. Each separate college holds a quad, accommodations, dining hall, and a chapel. Most undergraduate teaching at Oxford is organised around weekly tutorials at the self-governing colleges and halls, supported by classes, lectures and laboratory work provided by university faculties and departments. It’s all very fascinating how they govern themselves and I really enjoyed touring and learning about the colleges we visited. First stop – New College!

New College was founded by William of Wykeham in 1379 for the education of priests, the College has grown to become one of Oxford’s largest. While learning and scholarship are the primary focus, the College also has an exceptionally rich sporting, cultural and musical life. New College Choir has an international reputation. It was a beautiful campus and we even tried to have a little fun! 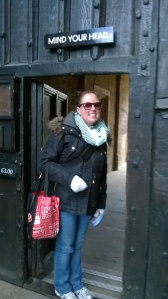 Before we headed to Christ Church, we stopped to have a little picnic in the garden of New College. It was such a beautiful day and we tried to soak up all of the wholesome sunshine we could!

After lunch, we headed to Christ Church. This College is one of the largest in the University of Oxford and is also the Cathedral Church for the Diocese of Oxford. It has a world famous Cathedral Choir; scholarly collections of books and art; and is enjoyed by many people as visitors or guests at conferences and Summer schools. It also holds a fascinating history and many distinguished people have studied here including John Locke, Robert Hooke, John Wesley, Robert Peel, William Gladstone, W.H. Auden, David Dimbleby, Rowan Williams, Richard Curtis and Howard Goodall. We really enjoyed seeing the grounds, but were disappointed that the dining hall was closed that day. If you didn’t know the dining hall at Christ Church was used in the Harry Potter films for the scenes that include the Great Hall. Hopefully I will get a chance to return to Oxford before we leave London.

Our last stop of the day was the Cathedral at Christ Church. The Cathedral is the College Chapel for the College as well as the cathedral church for the Diocese of Oxford. The beautiful building is home to a vibrant worshipping community with a rich worshipping tradition and a world famous Cathedral Choir. We were so lucky that the choir was practicing for the evening song and we stopped to have a listen. We had a lovely time in Oxford and I’m so glad we were able to spend the day there!