For the first two weeks of April, we had the pleasure of hosting our nephew Brandon and his girlfriend Kelly at our home. London (and us!) was the last stop in their trip across the pond. During their six weeks in Europe with the Carl H. Lindner College of Business, they studied in Toulouse, France and Barcelona, Spain. After meeting them at the bus station after a long journey from Amsterdam, we had a traditional Sunday Roast for dinner and they filled us in on all their travels.

can’t wait for them to arrive

thumbs up for London!

For the first few days of their visit we also hosted two of their classmates, Kenny and Alex. It worked out perfectly as the four of then would tour the city during the day, while we were at work. They did so many awesome things such as meeting Emma Watson at the Noah preemie, touring the HP studios, and seeing all the London sites. On one of nights during their visit we purchased £15 tickets to see Wicked!! 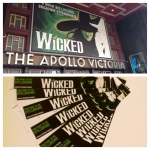 and ready for the show to start!

ready for some football (aka soccer)

On Friday is was time to say goodbye to Kenny and Alex say hello to our long weekend with Brandon and Kelly!! We started off with a little Red Sox baseball watching for opening day.

On Sunday afternoon, we headed to the Thames for The Boat Race, the annual rowing race between Oxford University Boat Club and Cambridge University Boat Club. The biggest question of the day was “Which Blue are you?” While Brandon, Nadia, and I opted for dark blue (Oxford), Kelly opted for light blue (Cambridge) and unfortunately for Kelly she lost! Even though it was a little chilly, we had a great time participating in this popular fixture in the British sporting calendar.

dark blue all the way

just in case you missed it

big screens to watch the race the whole way

beautiful day for a boat race

such a fun day

We woke up Monday morning to rain, but we didn’t let it stop our plans and headed out to Stratford to the newly opened Queen Elizabeth Olympic Park!

The sporting complex was built for the 2012 Summer Olympics and the 2012 Summer Paralympics, situated to the east of the city adjacent to the Stratford City development. It contains the athletes’ Olympic Village and several of the sporting venues including the Olympic Stadium and London Aquatics Centre. The park is overlooked by the ArcelorMittal Orbit, an observation tower and Britain’s largest piece of public art. It was simply called Olympic Park during the Games but was renamed afterward to commemorate the Diamond Jubilee of Elizabeth II. There is a lot to see in this giant park, but due to the rain we only spent enough time there to take pictures!

After the park we headed over to the Tate Modern to catch one of the best views of the city at their restaurant. After stopping for a spot of tea, we headed to The Mayflower Pub to grab dinner. The Mayflower is the oldest pubs on the Thames and is said to be the spot where one hundred and two passengers and crew, set out from their last port of call at Plymouth, on the 6th September 1620. Rumor has it, to avoid paying mooring taxes Christopher Jones tied up alongside the Mayflower pub and the passengers boarded the ship, which then sailed to Plymouth to pick up the remaining passengers before their voyage to America.We enjoyed the amazing food, atmosphere and drinking BLUE MOON!!! It was a great time and perfect end to our day! I highly recommend The Mayflower to anyone who is traveling to London!

Tuesday morning, we had a much nicer day to work with and ventured out to Wimbledon to see it’s very famous tennis complex. Unfortunately for us the tour was a little expensive, so we opted for walking around outside and visiting the gift shop. After Wimbledon, we ventured over to Roehampton to give B&K a tour of campus before heading to a late lunch and then get more desserts! We had a lovely time seeing a new place and showing B&K Roehampton.

Wednesday it was back to work for us and B&K did some last minute shopping. After work we met back at our flat to have dinner together and of course enjoy last night cupcakes!

After 11 days of laughter, singing, exploring, and eating yummy desserts, the house felt pretty empty when they left. We felt so lucky to have spent this time with Brandon and Kelly and will cherish their visit. Thank you so much for making us part of your study abroad adventure!!! We love our Bearcats!! 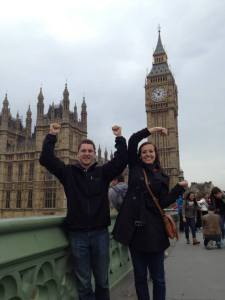